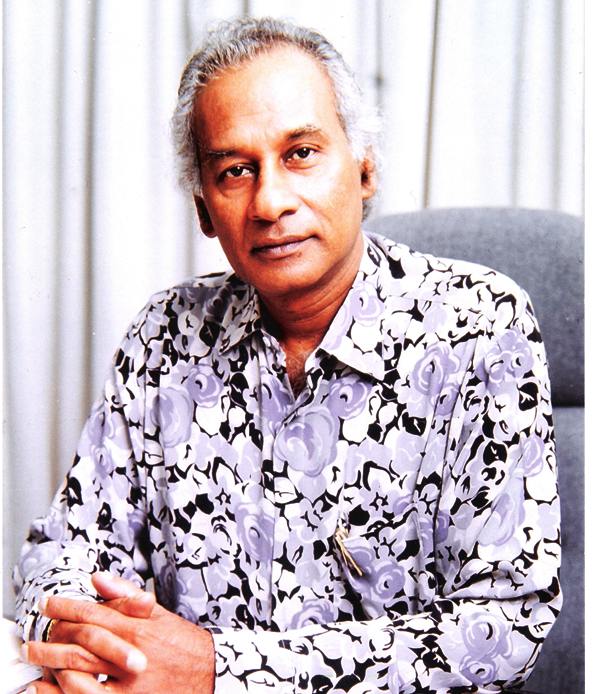 He was fondly known as  'Radio Bala' for his passionate, sincere, dedicated and loyal service to the broadcasting industry and the Tamil language and literature.

Balakrishnan was born to Ramanujam and Krishnamma on 26.12.1936 and raised in Rubana Estate, Teluk Anson, where his father was a conductor. He was one of seven children - four sons Balakrishnan, Badmanaban, HariRamulu, Sambasivam and three daughters Ratha, Indravathy and Pushpa Leela.

He began his studies in the Tamil school in the estate during the Japanese Occupation, but continued his studies in English in Seremban, with the help of his uncle who worked on the railways. Here Bala  had the opportunity to attend both English in Anglo-Chinese School (ACS) in the morning and Tamil in Vivekananda Tamil School in the afternoon.  Later his uncle was  transferred to Teluk Anson. So Bala pursued his studies in Teluk Anson ACS and in Baratha Matha Tamil School from his home in the estate. This was a very gruelling exercise which required Bala to get up very early in the morning, cycle down to the Kinta River which separated his home from town, cross it by sampan, then continue cycling to school about 8 kilometers from the jetty. He was also very involved in playing games, particularly football and by the time he finished his extra-mural activities, he was completely exhausted when he reached home.

When he came to Upper Secondary School, he opted to stay with his teacher, Mr. Stanley Padman, who was his mentor and guardian. Bala who was quite a stubborn and difficult child at home saw his angel in Mr. Padman, who made a turning point in Bala's life. Bala changed for the better and focused on his studies and games even more. He was made  head prefect and he actively participated in debating, literary,  drama and geography society activities and spent a lot of his time playing football and hockey. He appeared quite often in the media on account of his achievements in football.

Bala completed his Form Six in Ipoh ACS and was the first in his estate to get into university. He entered University Malaya in Singapore in 1956. At  the  University he made friends who till today remember him as Rockefeller - a generous, kind-hearted and caring gentleman. He excelled in his games and studies. In a soccer match played between Singapore University and Hong Kong Team, Bala, as a goal-keeper, kicked the ball with such fervour that it landed with amazing speed into the opposite goal.  Aptly he was known as 'Goalie Bala' from then on.

He graduated with first class honours in Indian Studies in 1960 and was awarded the University Book Prize for academic excellence the same year.

Balakrishnan joined as a broadcaster, in the Indian Service, Radio Malaya in 1960, at the age of 24, as a Programme Assistant. In 1961 he became the Head of Indian Service. He always maintained that his best friend Pathmanaban should take  the credit for  persuading him to apply for the job.

He also worked as a part-time lecturer at the University of Malaya Indian Studies Department from 1961-1970.

Bala firmly believed in innovation and brought about several changes to the Indian Service. The Indian network which was  hardly audible not only became clear, but also could be accessed in more areas. The programmes grew, widening their scope to cover all aspects of broadcasting, such as news, sports, literature, language, stories, radio plays, legends and epics in the form of poems, drama,  discussion forums,  talk shows on social problems and current issues  and phone-in conversations with listeners were  introduced during his time. Bala was a perfectionist; he was obsessed with quality which to him meant "zero - defect." He took  great pains to ensure that news and feature translations, programme  production and presentation, voiceovers and scripting were of the highest quality. Thus through  all  such  transformation he created a paradigm shift in broadcasting.

Bala created programmes to inform and educate  the Indians tucked away in the rural areas through voices from the Information, Legal and Agricultural Departments, while the needful for their daily life was piped through social and traditional dramas and country music and dialogues dealing with their daily bread and butter issues.

The great lovers of classical music were not left out either. Bala brought famous classical singers and musicians from India and Sri Lanka  and filled their ears to their heart's content. Studio recordings of these classical maestros were  re-broadcast at some intervals on the classical music segment.  The others not so keen had the opportunity to appreciate the music too. Bala believed in educating the general public even in entertainment.

Bala also presented his own programmes  : these included "UN Speaks," and "Listeners Questions Answered." To those who wrote in to provide some feedback on his presentation, he responded  with much candour and panache.

He was a stickler for correct pronunciation and proper and correct usage of the Tamil language and took the trouble to consult  experts in India when there were  doubts or conflicts in the usage of certain words, terms or expressions in question.

TAMIL OVER THE AIR

The Tamil language in broadcasting shed all foreign words and expressions of Sanskrit origin and adopted its pristine image in enunciation and usage. Bala zealously guarded this image of language purity during his tenure of office,  which has been  acknowledged and acclaimed as the 'Golden Era' of Tamil broadcasting until today.

Bala did not hesitate to go to great lengths in his capacity as the Head  to obtain what the Indian Service rightfully deserved and made it to be on par with  the English, Malay and Chinese networks.

The staff of the Indian Service, some of them  handpicked by him, worked sincerely and with great enthusiasm,  zeal and commitment. Besides, Bala monitored them very closely and there was no chance for error of any kind. Many have benefited and have risen high as professionals in their chosen fields because of Bala's timely help in providing opportunities for those who had shown keen interest. On the flip side, he swiftly dismissed those who clocked their time at work with no productivity. He strongly believed in progress within and without. Everyone should have the freedom to grow and soar to greater heights in his or her chosen field, was Bala's desire and expectation.

Though Bala was extremely strict with his staff, he showed love, compassion and concern for them. Outside the guarded Radio station, Bala was an affectionate friend to all.  Bala claimed that he could not have achieved all this alone but for the talent, skill and unstinting support and  cooperation of his colleagues who worked with him and made his dreams come true.

From 1962 - 1972, Bala worked concurrently as Head of Indian Service and Director of Institut Penyiaran Tun Abdul Razak (IPTAR), Radio Television Malaysia. IPTAR is the National Broadcasting Training Centre, the first one of its kind to be built in South East Asia.

On March 27,1965, at the age of 28, Bala married Girijah Naidu, the only daughter of Mr. M. R. Naidu, Assistant Commissioner for Labour. Once again  Dato K. Pathmanaban was instrumental in the arrangement of this arranged marriage. It was the wedding of the year and was televised as the best Telugu wedding.

In 1976 Bala was appointed by UNESCO to take over the Asia-Pacific Institute for Broadcasting Development (AIBD). He became the founding Managing Director of the Institute. His extraordinary drive and intellectual energy made this and other similar institutions greatly respected players in the broadcasting industry, both locally and internationally. In recognition and appreciation of his  outstanding performance and significant contributions to the development of the broadcasting industry, Bala was awarded the fellowship of the  Ryerson Institute of Toronto, Canada, in 1988.  He  was the first Malaysian to receive this  most coveted award. After about 10 years of service with the  AIBD, he bowed out.

Balakrishnan set up several enterprises and consultancies dedicated to serving the community. At the same time he was also the Chairman of  "Tamil Osai," a broadsheet Tamil daily until it ceased publication in 1991. Later he became  Board Chairman of   "Makkal Osai,"  another Tamil daily. As much as he has contributed to broadcasting, he contributed to education, tradition and culture of the Indians.  His gentle nature, love for humanity and generosity touched people of all races and ages.

As an unofficial doyen of the Indian public, he was well-known to one and all. He worked closely with Tun Sambanthan, Tan Sri Manickavasagam, Dato K. Pathmanaban and Dato S. Subramaniam to improve the lot and living standards of the Indian community. Admiring the loyalty and sincerity of these leaders, he remained loyal to them throughout his life.

Until his last days he chaired the Rama Subbiah Scholarship & Loan Fund which provides less privileged students with opportunities to pursue higher studies. His last project was an educational supplement to prepare  UPSR students for their exam in Tamil schools. It was a huge success. Today, the programme is posted on the 'Makkal  Osai' website, free for all students sitting for the UPSR examination.

Bala  also served as  the Chairman of Koperasi Belia Maju Jaya whose objective was to help Indians to set up small businesses by providing  concessional loans.

While working for broadcasting, Bala was:

Bala to his last day, even when plagued by his lung condition, never gave in to adversity or life's setbacks. He was an inveterate optimist throughout his life.  Nothing would cloud his optimism or his faith in human nature.

Bala greatly enjoyed the company of his friends and relished every opportunity to entertain them with home-cooked food or at restaurants with authentic Indian food and white wine. All his conversations and meetings with friends ended with an invitation for lunch or dinner.

He loved dressing and grooming himself meticulously. He was always immaculately dressed. Most of his shirts were cotton or silk and inevitably blue in colour. He spoke in impeccable English and Tamil and carried himself with dignity. His height and majestic walk topped it all and he was very much aware of it. He loved compliments whether directed to him or others.  He was never short of sarcasm and injected his criticism where it was deserving with no fear or favour. Time and punctuality was of utmost importance to Bala and he would not excuse anyone who  disregarded their  importance.

Bala was diagnosed with emphysema (a lung disorder) and fibrosis in his lungs, an irreversible condition. Though the illness robbed him of his breath, he never lost his fortitude or his cheer to his last feeble breath. On 25th May 2009 at 12.25 a.m. he died in dignity, having the opportunity to speak to all his friends and family members. He had the most glorious funeral, attended by thousands and escorted by police riders to the crematorium in style. He was indeed a very blessed man. He had lived life to the fullest and has bequeathed  a rich legacy for us all to cherish.

His nagging regret on his way out was that he could not spend more time with his grandchildren. Otherwise, he always said his was a well-lived life. The family bound with his great  family values and deep love finds solace in his good memories and glorious achievements.

The grandchildren wished they were born earlier to know more of their grandfather, while his children miss the pillar of strength that guided them through their life.

All of us pray Bala rests in peace.